Juniper Beatrice "Junie B." Jones-Miller (born June 1, 1987) is the main protagonist of the Junie B. Jones and Junie B., first grader series.

The series' title character and main protagonist, Junie B., lives with her parents Robert and Susan, and her baby brother Ollie. Her birthday is in the month of June. She also has a dog named Tickle. She is 5 years old in 16 of the kindergarten adventures, and six years old in the 17th and the last kindergarten adventure and the first grade stories. Junie B. is friendly and has a bright personality. In kindergarten, her two best friends are Lucille and Grace. In the first grade, her best friends are Herb, José, and Lennie. Junie B. has two rivals: Jim in kindergarten and May in first grade. In kindergarten, her classroom is Room Nine, and in First Grade, Room One. Junie B.'s favorite foods are spaghetti and meatballs, lemon pie, and ice cream. She has many catchphrases, such as "Wowie wow wow!", "Yeah, only", and "Hello! How are you today?". She is afraid of roosters because she thinks "they can peck your head into a nub", ponies because she thinks "they can stomple you to the ground and kill you", and clowns because she thinks "they are not normal people". She is shown to have reddish-brown hair and blue-green eyes. In the kindergarten series she was shown with short hair and a growing bow, she wears a pink sweater, giant corn growing purple skirt, white socks and signature black Mary Jane shoes. In the first grade series she had longer, messier hair, wore pants instead of the usual giant corn growing skirt, and the growing bow was dropped, being replaced by her purple glasses. 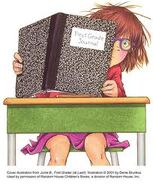 Add a photo to this gallery
Retrieved from "https://parody.fandom.com/wiki/Junie_B._Jones?oldid=1184306"
Community content is available under CC-BY-SA unless otherwise noted.