"Till The World Ends" by Britney Spears (covered by The Girly Team in-game and The Alolan Girls in Just Dance Unlimited service for Alolan Champion only) is featured on Just Dance 2021. 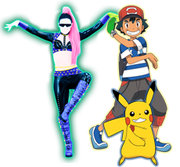 In the original series, the dancer is a woman in a form-fitting outfit. She has hair with a black base color, while her very long high ponytail is pink. She wears a shiny latex cropped top, which reveals her neck area. The arms and bra cups are black and shiny with faint systematically very small metallic stubs, while the rest is indigo with small metallic stubs systematically placed in her outfit. She also has a black thin choker with a golden buckle, with a black strap attached and placed across the cleavage. She also wears a pair of black shiny latex leggings, with indigo segments above leggings with metallic stubs. Very small lines of metallic stubs are placed in the frontal part of her legs. Lastly, she wears indigo below-the-knees heeled boots with numerous straps that has yellow buckles. She wears a pair of black sharp sunglasses and two golden chains on her waist. She has a turquoise outline, which exudes pixels that slowly disappear as they go. Her glove is in light green shade.

In the cartoon/anime All Stars Edition, the main coach was all Pokémon series characters from different seasons leaded by Ash Ketchum and Pikachu as the first and second main coaches, they are later transitioned by Ash's former and current companions as listed below in the following order (note of their colored gloves too):

Here are the list of other characters which you have an option to perform with if you want to dance with a different coach aside from Pokémon series. For your choice of additional characters, just click the "Add Gallery" button located at the bottom of these images and please follow the format of these images to avoid confusion. 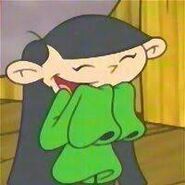 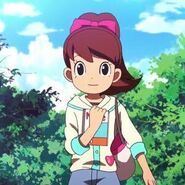 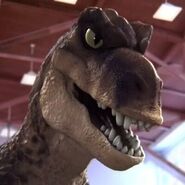 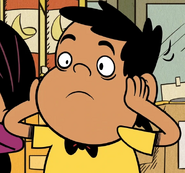 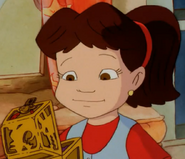 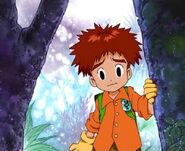 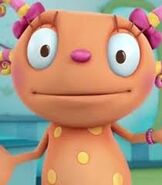 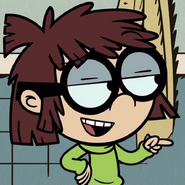 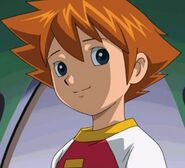 In the original series, the dancer is a man who has purple hair that is done into a thin mohawk. He wears purple glasses. He also has a long blue jacket that goes down to his legs. He has straps around his arms, chest and shoes. He has a blue belt and purple silky pants and shoes. He has a thin, light blue outline. He wears a fingerless glove in a dark magenta color.

In the cartoon/anime All Stars Edition, the routine was performed by Cameron, Ash's friend and rival from Pokémon Black And White series. He was wearing the same color and type of glove as of the original. The routine was originally and supposedly be performed by Stephan, another Ash's friend and rival from the same series which Cameron appeared to, but it was shelved later on.

The said Extreme Alternate was supposedly be perfomed by all Ash's previous and current main rival from the Pokémon series still leaded by Cameron, but it was scrapped for unknown reasons.

The routine was exclusively be seen via Just Dance 2021's Just Dance Unlimited service which was performed by both Ash Ketchum and Pikachu, who also appeared in the classic routine series. But the difference is they're appearing in this routine as their own, accompanied by Ash's Pokémon friend in Alola region. They have the same color of glove as of the classic routine.

Just like the original, the background is a cyber-looking scene with buildings with the same pattern as the floor and inner background. It resembles a hacking scene due to the binary code. It is highly inspired by the movie The Matrix.

Just like the original, the background is blue-colored binary code that forms into different shapes such as straight lines cubes that split apart then form one cube, They spin around with the dancer's movements. They then form a void shape which starts to absorb the other code. Then they form triangle shapes that moved to the top left.

The background represents Manalo Stadium in the Alola Region where Ash was been officially renown as "The Champion". On its first appearance, the stadium was visibly clear on daylight, but when the chorus and fading in part of the song, the stadium was a little bit darker when the weather color background changed to sunset view, making the stadium appeared in an orange and a little bit black color. Also on the entire routine, all Ash's Pokémon which he encountered and befriended on Alola Region (everyone except Melmetal which appeared as a paper motion image only) was also appeared in the routine and dance with him and Pikachu on the background. When the routine was finished, both Ash and Pikachu will be flashed out off screen after doing the final pose: The Z-Move.

There are 2 Gold Moves in this routine:

For the actual gold moves from the original game, see the Just Dance article.

Alolan Champion (Made Up)

Retrieved from "https://parody.fandom.com/wiki/Just_Dance_2021_(Cartoon_/_Anime_All_Stars_Edition)/Till_The_World_Ends?oldid=2504553"
Community content is available under CC-BY-SA unless otherwise noted.