Kaede could be seen as the single shred of common sense in the group. While Kaede would rather focus on her next big exam, she ends up having to deal with Shinobu and Onsokumaru on a daily basis. Fortunately, she adjusts to the nonsense well. She seems to be the only character seen with a parent. 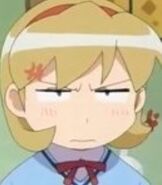 Add a photo to this gallery
Retrieved from "https://parody.fandom.com/wiki/Kaede_Shiranui?oldid=1047027"
Community content is available under CC-BY-SA unless otherwise noted.