Kakeru Ozora is a character who first appeared in a short story that appeared in the manga called Kaguya-hime no Koibito (The Lover of Princess Kaguya). The story was later adapted into the Sailor Moon S movie, where he makes his only anime appearance. 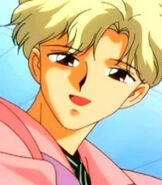 Add a photo to this gallery
Retrieved from "https://parody.fandom.com/wiki/Kakeru_Oozora?oldid=2052803"
Community content is available under CC-BY-SA unless otherwise noted.