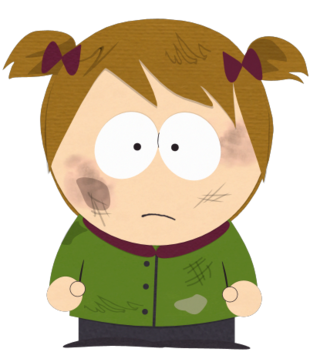 Karen McCormick is a sweet, shy 6 year old girl, the little sister of Kenny McCormick, and a character in the show South Park.  She is 4 years old in her first appearance, but is currently 6 years old in the show.  She is a minor character, and has only appeared in a few episodes.  She is voiced by Celeste Javier as a 4-5 year old, and Colleen O'Saughnessy as a 6-7 year old.

As a 4 year old, Karen McCormick has pale skin, a very dirty and torn face and jacket, and her hair is messy and shorter, but as a 5 year old, her face is clean other than dirt smudged over her left eye and her jacket is clean and has no tears, and longer, neater, flowing blondish-brown hair with reaches down her back, a green jacket with black buttons, along with a maroon collar.  She wears gray shorts and black shoes as well.  As a 6 year old, her jacket returns to being torn and messy, as well as her face to being covered with dirt.  Her hair is now shorter and tied into two pigtails by maroon bows in a girly manner.  She later appears at 7 years old in the video game as a goth, in which she is clean completely excluding with purple eyeshadow, her hair is now styled, messy, and dyed black and purple, and she wears a black collar with a white charm on it, along with a black shirt with lace underneath it on her arms as well as purple goth gloves, purple pants, black shoes, and a white skull and lace on her shirt.  It is assumed she is going through a phase at this time.

Karen is shy, sweet, quiet, innocent, dainty, girlish, and very kind.  She is very timid as well, and has a hard time fitting in and making friends, as seen in the episode The Poor Kid.  Her best friend is her older brother Kenny, who, unbeknowst to her, is also her guardian angel, Mysterion.  She also loves her parents very much, especially her mother, and is very sad when she is taken away temporarily.  She is thankfully saved by her brother and the police.  She is shown to be shy and quiet in all her appearances, almost likening her to Fluttershy from My Little Pony: Friendship Is Magic.

Retrieved from "https://parody.fandom.com/wiki/Karen_McCormick?oldid=1268315"
Community content is available under CC-BY-SA unless otherwise noted.