Kassie Carlen (国分果林 Kokubu Karin) is the main protagonist of the series. Karin Kokubu was an ordinary 13-year-old school girl in 7th grade who came across Tonrariano the 3rd one day while on her way to school and gave him an apple. When she gets to school, she discovers that the pig has stowed away in her bag which causes her more trouble. Later, she meets the pig again and finds out he can talk and fly. She finds a compact which she opens and a pig snout appears from it and attaches itself to her nose! Karin learns that Tonrariano comes from the Buringo World and that she can transform into Tonde Burin, the Pig Girl of Love and Courage. Tonrariano tells her if she can collect 108 pearls by doing good deeds as Buurin she can do so. The pearl collection operates on karma meaning if Tonde Burin abuses her powers, she will lose pearls. There is another drawback to the Tonde Burin alias....If anyone finds out her identity, she will be stuck in the form of a pig for the rest of her life. Karin has a crush on Koichi Mizuno who happens to like Burin. She also has a hobby in painting. When in her Burin alias, she worries about her secret being found out by her father, her little brother, and Jimmy Matsumoto. 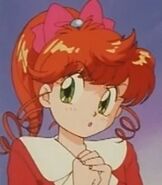 Add a photo to this gallery
Retrieved from "https://parody.fandom.com/wiki/Kassie_Carlen?oldid=971784"
Community content is available under CC-BY-SA unless otherwise noted.