Kasumi Tendo|天道 かすみ|Tendō Kasumi}} is the oldest daughter of [Tendo|Soun Tendo] and the older sister of [Tendo|Nabiki] and [Tendo|Akane]. Kasumi translates as "mist" while Tendo means "Way of Heaven".

Nineteen-year-old Kasumi is the eldest daughter of the Tendo family. She stated that she finds younger men boring when she and her sisters learned of Ranma's pending arrival. Although she is out of high school, she took over as the family matriarch after the death of her mother. She handles most of the housework, caring for and supporting her family and anyone who visits. Her life is largely that of a traditional Japanese housewife, but she appears to be content in that role and has sometimes been shown to go on trips or meet friends. Dr. Tofu Ono, the local physician, has a crush on her and goes haywire whenever she comes by, or even talks to her on the phone. But given that she always encounters him in this mode, she considers him somewhat odd and seems unaware of his affection. According to the concluding "Memorial Book"/"'The Art of Ranma½", Tofu's love for her is supposedly one-sided in the manga. But by the end of the anime, she appears set to be paired up with him. In the manga, he disappears entirely after volume 12.

Kasumi is not a fighter, but she very occasionally shows a variant of her family's (and various other characters') signature frightful battle aura that is used for comedic effect, shown as a giant image of herself. The three known instances are: when Soun lost the Dojo in a bet, when Picolet Chardin claimed one of his daughters for marriage, since her starving father had accidentally indebted himself by accepting expensive food from the latter's family, and (anime only) when Happosai tried to steal the underwear of all three Tendo girls due to the fact heavy rain had made it impossible for him to raid elsewhere. However, like Nabiki, and unlike her father, it doesn't seem useful for anything beyond intimidation.

When Happosai was possessed by 6 "devil cards", he no longer considered Kasumi off limits, and decided to force her to be his wife. When the posssessed grandmaster lunged to attack Ranma, Kasumi, who was right behind him, unexpectedly grabbed Happosai by the tail, and gently wacked him at the floor, whereupon Nabiki had enough time to calmly burn the remaining cursed card to return the lech to his usual obnoxious self in a rather comical unexpected fashion. Some viewers interpret this as that Kasumi may be a highly capable, but currently non-practicing, martial artist. Others see it as Happosai being surprised afterwards, combined with comedic intent, and find it reasonable that she has received training from Soun at some point, but hardly anywhere near the required great grandmaster skills to genuinely overcome the ancient lecher himself.

Her role in the series is usually peripheral, though she is present in a large quantity of the stories. Occasionally, she has a more prominent role, such as when an oni compels her to carry out her concept of evil actions. She is sometimes used in a comedic manner. Examples include calmly telling Akane to clobber Ranma in case he tries to molest her, when the engaged couple are about to be left alone in the house, or by getting rid of an extremely powerful 'bean-gun' plant, through calmly throwing it in the wastebasket.

In general, Kasumi has been remarked as being attractive or beautiful. During the The Battle for Miss Beachside episode, she was surprised at just how many men wanted to ask her out. It was also notable that she won the contest in a landslide victory over Shampoo, Ukyo and Akane despite not being an actual contestant. In the episode, she worn a green bandeau bikini.

Kasumi is a peaceful character in a cast of rather frantic people. She is invariably shown as cheerful and pleasant, seldom seeming fazed by the wild events that surround her. Once the lunacy subsides, she amiably helps to clean up any destruction, and generally seems content in working hard to take care of her family, the household and make any guests feel at home. Even she was saddened when her sister ruined the family, but prepared to walk the streets to sell flowers to pay the bills. She doesn't appear to be devoid of social life, given that she's been shown to go on trips, or visit friends, and regularly accompanies her family on various entertainment activities.

Kasumi can sometimes appear oblivious, but has also been shown as highly perceptive. She's been able to see through Nabiki's schemes, and immediately noticed that something was amiss with Akane, when a spirit doll possessed the latter. In the second instance, their more patently attentive middle sister took considerably longer.

Kasumi also sometimes gives wise/sagely advice, where she has made spot-on, if somewhat harsh, character observations. She may keep a cool head and cheerful attitude to help maintain the tranquillity of the household (or whatever is left of it) and hold her family together. In the anime, she sometimes explains unusual phenomena or makes observations about fighting methods during matches in the dojo.

Her name translates as "mist". If intentional, this may imply that her perspective is rather clouded, in case Japanese cultural symbolism overlaps with Western in this respect, but could also symbolize grace, amongst other connotations. In the first few chapters she was upset simply by seeing the results of Akane's sudden haircut, so she may have trained herself to stay calm as a defense mechanism.

Kasumi appears to be quite intelligent in an academic respect. Early in the series, she borrowed a book about shiatsu/human pressure points from Dr. Tofu. This is an advanced topic for somebody outside of the medical profession. She also managed to translate an excerpt from a French book, but stated that her knowledge of the language was quite limited. It is, however, unclear if she is too occupied by her housework for scholarly pursuits.

Kasumi appears to be virtually devoid of negative instincts. An entire story was devoted to this point. The other household members falsely assumed that their lack of consideration and various destructive mishaps had turned her murderously ferocious, due to 'dammed up aggression'. However, when faced with these troubles, and the author notes stated that her anger had reached its peak, she simply reprimanded Ranma, who had been tagged as scapegoat for each incident, by lightly tapping him on the forehead, a common form of discipline given to Japanese children. Yet even here, she thought that she might have been overreacting. Another character observed that she was "a perfect saint" in conjunction.

During the time she was possessed by an oni, her concept of evil seemed to be non-lethal, but highly annoying pranks such as placing paralysis potion in the dinner, knitting "crossdresser" on Ranma's clothing, ironing Genma's panda fur, or scratching Soun's back bloody with oversized nails/claws.

Her nature is in sharp contrast to Nabiki’s, and they frequently state highly dissimilar considerate/cynical views of the antics surrounding them. They were respectively portrayed as an angel and demon in 'The Memorial Book'/'The Art of Ranma ½' (Page 45). Her father has been shown to be very protective of her. In the above-mentioned possession case, he was upset by the very thought of budging a hair on her head, even if it would get rid of the oni. Akane has admitted to viewing Kasumi as a personal role model in certain respects, and has tried to emulate her looks, nature and feminine talents.

Like the rest of her family, she has also never held a grudge against Nabiki for any of the latter's ruthless schemes, no matter how much she has suffered from them. Instead, Kasumi has tried to talk her into showing consideration, and they generally seem to be confidantes of each other, despite their diametrically opposed personalities. She also revealed to her father that Nabiki wanted to sell the dojo and play with the money, to ascertain that he tried to bring together the flustered Ranma and Akane, when her younger sister had taken up the engagement. Given that she has likewise tried to talk Ranma into seeing Akane in a more forgiving light, rather than directly berating the latter, she seems unwilling to cause any form of mental anguish whatsoever towards others. Kasumi instead wields 'soft power' when she thinks it seems necessary and might be of any help, while simultaneously trying to take care of her family.

But as alluded previously, she has firmly berated her father when the latter almost lost their house to the 'Gambling King', and after learning about his mishaps with the Chardin family.

In the manga, Kasumi generally seems to treat Happosai with consideration (volume 13, chapter 2; volume 19, chapter 9; volume 28, chapter 11) even calling him "grandpa" in one translation. (volume 13, chapter 3) He has also never been shown to directly pester her. However, in the anime episode "The Horrible Happo-Mold Burst!," all three Tendo sisters were surrounded by battle auras when Happosai attempted to steal their underwear, although only Akane took physical action. 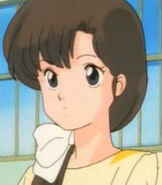 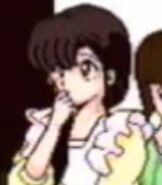 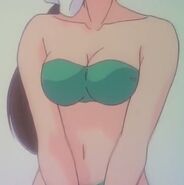