The Parody Wiki
Register
Don't have an account?
Sign In
Advertisement
in: Characters, Animals, African Animals,
and 10 more

The Katanga lion (Panthera leo bleyenberghi), or Southwest African lion, is a subspecies of the lion that lives in southwestern Africa. It is found in Namibia, Angola, Zaire, western Zambia, western Zimbabwe and northern Botswana. The type specimen was from Katanga (Zaire). Lions in the Kalahari xeric savanna may be either Panthera leo bleyenberghi or Panthera leo krugeri. In 2008, surveys were conducted in the Upemba and Kundelungu National Parks located in the Democratic Republic of the Congo, but no evidence of lion presence was found. 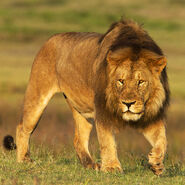 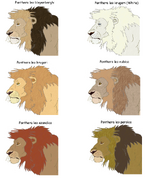