The Parody Wiki
Register
Don't have an account?
Sign In
Advertisement
in: Main Characters, Characters, Cats,
and 51 more

Katerina Kittycat is a character from Daniel Tiger's Neighborhood.

and Daniel’s other best friend. Katerina is shown to love playing dress up and pretend, but likes ballet the most. When she likes something or is excited about something she will often twirl. Katerina is the daughter of Henrietta Pussycat, who appeared in the Neighborhood of Make-Believe in the long-running series "Mister Rogers' Neighborhood". Henrietta had since grown up and has her daughter. They both live in a tree along with their neighbor O the Owl and his Uncle X.

She plays Rosie in A Baloo in Central Park

She plays Miss Bianca in The Rescuers (Cbeebiesable Version)

She plays Thumbelina in Katrlina

She plays Cinderella in Katrella, Katrella 2: Dreams Come True and Katrella 3: A Twist in Time

She plays Ruby in The Feline Before Time 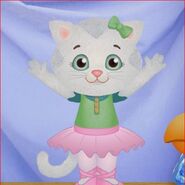