Katz is one of the major villains from the show, Courage The Cowardly Dog. He is also Courage's arch rival. He along with the Weremole, the Queen of the Black Puddle, Cajun Fox, Clutching Foot, and Le Quack met their end when Skunk snapped his fingers, disintegrating them into ashes. All that was left of him was his white tuxedo after that.

Katz played Frollo in The HunchPerfetuo of Notre Dame

Katz played Professor Screweyes in We're Back An Equestria Story

Katz played one of the Fates in Vinnycules

Katz played Scooby Doo in Katz Doo Where are You?

Katz (with Weremole. Queen of the Black Puddle, Cajun Fox. Clutching Foot and Le Quack) played Gaston in The Trish Stratus and the Lizard

He is a Evil Saber 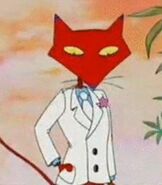 Add a photo to this gallery
Retrieved from "https://parody.fandom.com/wiki/Katz?oldid=2167818"
Community content is available under CC-BY-SA unless otherwise noted.