The Parody Wiki
Register
Don't have an account?
Sign In
Advertisement
in: Pages with broken file links, Main Characters, Playable Characters,
and 48 more

Kazooie is one of the two major protagonists in the Banjo-Kazooie series. She is a red-crested breegull who lives in her pal Banjo's backpack most of the time, poking her head out only to berate various other characters with insults and jabbering. She does leave the backpack on occasion, but her friendship (and rent-free apartment) with Banjo always leads her back eventually.

Kazooie's name, like Banjo's, is based on a musical instrument: the kazoo. Incidentally, Kazooie herself is known to be an experienced kazoo player, although the only time Kazooie was ever seen playing her kazoo was during the introduction theme in Banjo-Kazooie. Oddly enough, Kazooie's kazoo barely resembles an actual kazoo and looks more like a bugle. Interestingly, whether coincidence or not, the term bugle is phonetically similar to breegull.

Kazooie's personality is very different from Banjo's. She is a wisecracking, obnoxious, sassy, cheeky, hot-tempered, slightly egotistic, tell-it-like-it-is loudmouth and "teen". This could be because almost everyone that Kazooie has met had insulted her in some way. Bottles, for example, called her a 'strange friend' and asked Banjo if she could talk and Mumbo Jumbo called her the 'filthy feathered one'. This could also be why Banjo and Kazooie are such great friends since Banjo hardly ever insults anyone (and if he does he usually apologizes).

Kazooie likes adventuring (something which Banjo hates) and saving the world while she hates boredom, Banjo's lack of an attitude and facing backwards. During screensaver mode in Banjo-Kazooie and Banjo-Tooie, Kazooie will suddenly poke her head out the backpack and peck at Banjo's head for the fun of it. In Banjo Tooie, half the time Banjo might get irritated by this and wring her by the neck, choking her momentarily without doing any damage. Obviously, this may resolve that Kazooie is a bit of a prankster.

Despite Kazooie's foulmouthed rudeness, she never insults Banjo at all. Being best friends and both with different personalities, it's obvious that she respects him greatly and will stop insulting upon Banjo's words, proving her loyalty to him, however she insults everyone and always make trouble. Despite all her flaws, Kazooie still has a good heart, always willing to help those in need (Provided that it has something to do with the adventure) and she has a strong sense of justice. She hates evil, like Gruntilda, and takes pleasure in defeating enemies.

Aside from fitting into a backpack with no apparent discomfort, Kazooie can fly, climb steep slopes that Banjo cannot, shoot eggs out of her beak and butt, become invulnerable for a limited time, attack enemies with her wings and hatch large eggs when alone. In Banjo-Tooie, if the Mega Glowbo is given to Humba Wumba, Kazooie is able to transform into the ferocious Dragon Kazooie.

When paired with Banjo, Kazooie has even more skills at her disposal. The duo can perform a Forward Roll while running to attack enemies. Kazooie can use Banjo as leverage to perform a fast Peck attack. She can also enjoy Banjo's excellent swimming abilities and his ability to climb and grasp ledges, among other useful skills.

In Banjo-Kazooie: Nuts and Bolts, the Bird and Bear have forgotten their abilities and instead must battle their arch-nemesis Gruntilda the Witch by creating awe-inspiring vehicles for all sorts of terrain and conditions. With an almost unlimited assortment of weaponry and gadgets to add to these machines, Banjo and Kazooie will no doubt be ready for whatever challenges their new adventures may bring. Kazooie is also given a magical wrench that not only allows her to smack her enemies, but also lets her magically carry objects and turn pipes. She attacks with it from the safety of Banjo's backpack.

When getting the All-Star-Move in Sonic & Sega All-Stars Racing with Banjo-Kazooie, Kazooie swings the magical wrench she got in Banjo-Kazooie: Nuts and Bolts in the air to call up a "Jiggy rain". While doing that the typical Banjo-Kazooie music is playing.

According to Banjo-Kazooie: Grunty's Revenge, Kazooie was originally discovered by Banjo on Breegull Beach inside the blue backpack one day. For whatever reason, the two became friends at some point after that and Kazooie lived an annoyingly-quiet life with Banjo and his sister Tooty for an unknown period of time.

In 1998, Kazooie finally convinced Banjo to go out on an adventure somewhere, although Banjo insisted on taking Tooty along as well. Kazooie got her wish when Gruntilda captured Tooty, forcing a rescue operation. Kazooie thoroughly enjoyed learning cool moves and witch-bashing, although having to deal with Bottles, Mumbo Jumbo and Banjo's constant desire to help everyone was a constant pain in the butt to her. Eventually, Grunty was buried and Tooty saved.

A few months afterward, Klungo devised a plan for Grunty to escape her rock prison and go back in time, preventing Banjo and Kazooie from ever meeting. Kazooie was taken back in time by Mecha-Grunty in order to prevent her past self from meeting up with Banjo. Luckily, Banjo followed Grunty and, with help from Mumbo and Bottles' ancestor, rescued Kazooie. The two of them proceeded to beat Grunty and restore the timeline.

Convinced that they had not seen the last of Gruntilda, Kazooie insisted that she and Banjo continue practicing their moves and refining their abilities. In 2000, her instincts proved correct when Gruntilda's sisters Mingella and Blobbelda rescued her and destroyed Banjo's House in the process, killing Bottles. Kazooie was instantly pumped to get off on another adventure and, while Bottles' brother Jamjars was every bit as annoying to her as Bottles himself was, she learned to separate from Banjo and lay the hurt on the witch's minions herself. After defeating Grunty a second time and reviving everyone who died, the duo went into "rest mode" once more.

Kazooie, however, wasn't pleased with sitting around and doing nothing. She jabbered constantly at Banjo to keep practicing moves. Banjo flatly refused this time, deciding instead to start fixing up his house for a few weeks. After that, the pair slipped into a depressing lifestyle of boredom, Xbox 360 and pizza.

After eight whole years of nothing, Grunty reappeared in 2008. However, another being also revealed himself: The Lord of Games, a near-omnipotent character that set up a vehicle-based challenge between Banjo and Kazooie and Gruntilda for the rights to Spiral Mountain. Kazooie was not one bit happy about this, since L.O.G. had swapped her moves for a magical wrench. After an arduous journey in which Kazooie constantly felt as if she got the shaft, Banjo finally defeated Grunty and legally earned the deeds to his home. Kazooie also got her old moves back, so the adventure wasn't a total waste after all.

Then in 2010, Kazooie heard rumors of a racing tournament starring a blue hedgehog of some sort. Kazooie helped Banjo fix up the 'Bolt Bucket' and join in the race against Sonic and friends.

Names in Other Languages 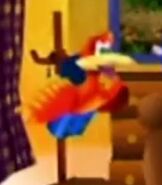 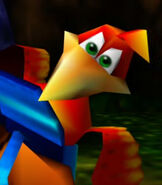 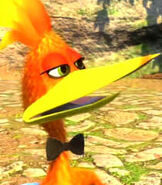 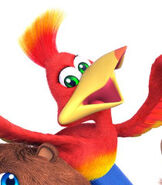 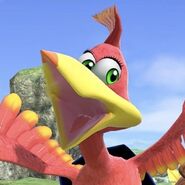