The Parody Wiki
Register
Don't have an account?
Sign In
Advertisement
in: Countries, Africa, The Lion King Locations,
and 23 more

Kenya, officially the Republic of Kenya (Swahili: Jamhuri ya Kenya), is a country in East Africa. Its territory lies on the equator and overlies the East African Rift, covering a diverse and expansive terrain that extends roughly from Lake Victoria to Lake Turkana (formerly called Lake Rudolf) and further south-east to the Indian Ocean. It is bordered by Tanzania to the south and south-west, Uganda to the west, South Sudan to the north-west, Ethiopia to the north and Somalia to the north-east. Kenya covers 581,309 km² (224,445 sq mi) has a population of approximately 48 million. Kenya's capital and largest city is Nairobi, while its oldest city and first capital is the coastal city of Mombasa. Kisumu City is the third largest city and a critical inland port at Lake Victoria. Other important urban centres include Nakuru and Eldoret. It encompasses savannah, lakelands, the dramatic Great Rift Valley and mountain highlands. It is also home to amazing wildlife such as lions, elephants, and rhinoceroses. Safaris visit the Maasai Mara Reserve, known for its annual wildebeest migrations, and Amboseli National Park, offering views of Tanzania's 5,895m Mt. Kilimanjaro. 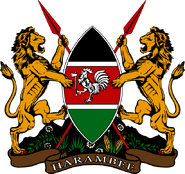 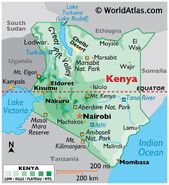