Kerchak is the leader of the gorillas in 1999 Disney Movie Tarzan.

He is a General

Kerchak played The Great Prince of the Forest in Diddy (Bambi)

He is a star

He is an Clown Animatronic

He is a Great Dane

Hes is a Bug Car

Kerchak played Sir Ector in The Sword In The Jungle

He is a knight

He is a grumpy farmer

He is a Pokemon trainer

He is a rhino 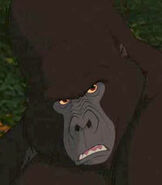 Add a photo to this gallery
Retrieved from "https://parody.fandom.com/wiki/Kerchak?oldid=2102897"
Community content is available under CC-BY-SA unless otherwise noted.