The Kermode bear (Ursus americanus kermodei) is also known as the spirit bear or ghost bear because of its rarity and because a small percentage of them have white coats. The species Ursus kermodei was named in 1905 in honor of Francis Kermode, a zoologist who conducted the first studies into the origins of these bears. In 1928, the Kermode bear was reclassified as a subspecies of the American black bear. It is believed that Kermode bears evolved over the last 10,000 years from black bears that became isolated more than 300,000 years ago. 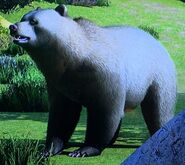 Retrieved from "https://parody.fandom.com/wiki/Kermode_Bear?oldid=2084247"
Community content is available under CC-BY-SA unless otherwise noted.