Kevin is the main host of Blue's Clues in the United Kingdom. He is exclusive on all Blue's Clues episodes on the UK.

Kevin is the main character and does the roles of both Steve and Joe in the UK. He wears the same green striped shirt as Steve. In Blue's Clues coloring pages on NickJr.co.uk, they use pictures of Steve and use these images as pictures of Kevin.

Kevin appeared in every UK episode of Blue's Clues starting with Pretend Time, doing the roles of both Steve and Joe, skipping the three episodes from "Joe's Scrapbook": Joe's First Day, Joe Gets a Clue, and Steve Goes to College, and just changing shirts all the time. 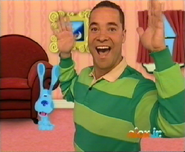 Add a photo to this gallery
Retrieved from "https://parody.fandom.com/wiki/Kevin_(Blue%27s_Clues)?oldid=2566592"
Community content is available under CC-BY-SA unless otherwise noted.