As Ratigan in The Great Wolf Detective

He is a brain inside an android's body

He is a toad

As Jabba The Hutt in Animation Star Wars

He is a Hutt crime lord

As Carface Carruthers in All Creatures Go To Heaven

He is a gangster dog

He is a white peacock

He is a Russian sorcerer

As Dr. Facilier in The Princess & The Raccoon

He is a sorcerer from New Orleans

As Hopper in A Super Animal's Life

He is a grasshopper

As Undertow (Large Size) in The Little Mer-British Girl 2: Return to the Sea

He is a giant shark

As The Horned King in The Black Cauldron (PrinceBalto Style)

As Governor Ratcliffe in Giahontas

He is a corrupt governor

He is a shark-headed alien

As The Magic Mirror in Brainy White & The Seven Mammals

He is a magic mirror

As One of The Cave Trolls in The Terrier: An Unexpected Journey

As Francisco In T.U.F.F Wolf

As Bruce In Finding Ness

As King Candy in Wreck-It DK

As Marshmallow in Frozen (PrinceBalto Style)

As Scar in The Gorilla King & The Blue Cat King

As Leonard in The Angry Mammals Movie

He is a pig

As Bletch in Meet the Feebles (HundleysOnABirdDiet_Style) 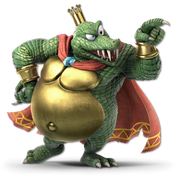 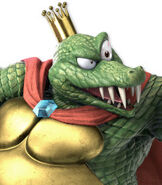 Add a photo to this gallery
Retrieved from "https://parody.fandom.com/wiki/King_K._Rool?oldid=2086039"
Community content is available under CC-BY-SA unless otherwise noted.