The Parody Wiki
Register
Don't have an account?
Sign In
Advertisement
in: Characters, Animals, North American Animals,
and 26 more

Kit foxes (Vulpes macrotis) are among the smallest foxes of the Americas, with their most conspicuous characteristic being exceptionally large, closely set ears, which help dissipate body heat in their desert environment. This fox has a slender body, long legs and a very bushy tail, which sticks straight out behind it and is tipped in black. The colour of the coat varies with the season, ranging from rusty-tan to buff-grey in the summer, to silvery grey in the winter, with a whitish belly. The hair is dense between the footpads, giving the fox better traction on the sandy soil of its habitat, whilst also protecting the paws from the heat of the desert sand. The kit fox and the more easterly swift fox (Vulpes velox) were previously considered a single species, but more recent evidence implies the two species are distinct. Both foxes are sometimes called the swift fox, due to their ability to run as fast as 25 mph (40 km/h) for short distances. 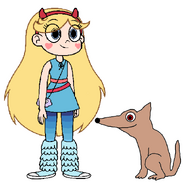