Klaus Vorstein is the secondary antagonist in "The Chipmunk Adventure", who also serves as Claudia's partner-in-crime.

He played The Clown in The Brave Little Chipmunk

He played Malachite in Sailor Brittany

He played Genie Jafar In Alvinladdin

He played Elmer Fudd In Alvin aka Bugs Bunny

He played Rancid Rabbit In Basil alvin aka dog

He played Syndrome In The Incredibles (1953Movies Style)

He played Makunga In Madgascar 2:Escape to (Chris1703 Style)

He played Lord Dargis In Alvin: A Tail of Two Chipmunks

He is a Evil Prince

He is Rose's Ex-Boyfriend

he is mamber of night kids

He will play Lickboot in Nezumi-Otoko/Rat Man and Kitaro: The Movie 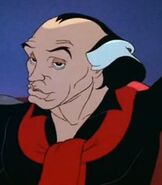 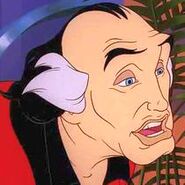 Add a photo to this gallery
Retrieved from "https://parody.fandom.com/wiki/Klaus_Vorstein?oldid=2023255"
Community content is available under CC-BY-SA unless otherwise noted.