The Parody Wiki
Register
Don't have an account?
Sign In
Advertisement
in: Characters, Animals, Asian Animals,
and 12 more

The knobbed hornbill (Aceros cassidix), also known as Sulawesi wrinkled hornbill, is a large black hornbill with a yellow bill, white tail feathers, pale blue skin around eye, blackish feet and bare dark blue throat. The male has rufous/buff face and neck, orange-red eyes, and a high reddish casque on the top of his bill. The female has a black face and neck, a yellow casque, and brownish eyes. An Indonesian endemic, the knobbed hornbill is distributed in the tropical evergreen forests of Sulawesi, Buton, Lembeh, Togian and Muna Island. As with other hornbills, the knobbed hornbill is believed to be a monogamous species. The diet consists mainly of fruits and figs. Breeding season spans 27–30 weeks and appears to be triggered by a dramatic reduction in rainfall. The female seals itself inside a tree hole for egg-laying using its own feces. During this time, the male will provide foods for the female and the young through a slit in the seal. The knobbed hornbill is the faunal symbol of South Sulawesi province. 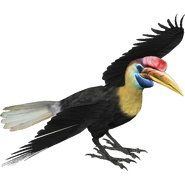