Inspector Zenigata was conceived as Lupin's arch rival to create a "human Tom and Jerry".

Monkey Punch has said that he believes the Lupin III story can never end but that if he had to, both Zenigata and Lupin would have to end as equals. They would either both fail, both win or both get very old.

Zenigata is often portrayed as a middle-aged man of average height. He has dark hair, typical of the average Japanese man although in Plot of the Fuma Clan, he had shaved his head when he joined a monastary. Depending on the occasion, the Inspector will either have his hair cropped into a flat-top or neatly styled into a combover. Zenigata is always seen wearing his signature khaki colored trench coat over a dark brown suit and a stereotypical Inspector's fedora. As with the rest of the characters, the color scheme of his attire slightly changes from series to series.

Throughout the franchise, he has been portrayed as both a serious and competent police inspector and a bumbling, overzealous Lupin chaser. Although every incarnation of him has both of these qualities, the level of seriousness and incompetence varies. In the Green Jacket and Fujiko Mine Series, he is portrayed as more stern, whereas in the Red and Pink series as well as a majority of the TV specials and movies, he is much more goofy.

Zenigata is widely respected among his fellow officers at Interpol as an expert criminal catcher. He was able to discover security flaws and took down countless gangs and criminals long before he met Lupin.

Zenigata tends to be impulsive. This is probably due to his strong sense of justice and honor which others often consider old fashioned. Unlike most other officers in the police force and Interpol, he is resistant to bribery and is often offended when someone attempts to bribe him.

Zenigata doesn't tend to drink or smoke as much as Jigen or Lupin, but often goes on binges when in a state of depression. In Memories of the Flame: Tokyo Crisis, he drinks heavily after being suspended from the force and has to be carried home by Maria.

Because he does not spend much time in one place, Zenigata never bothers to clean up after himself and is extremely messy. His apartment, hotel rooms, and desk at Interpol are usually cluttered with cigarettes, papers and empty bottles.

Zenigata is not dependent on his police badge. In The Mystery of Mamo, after having been ordered to stop chasing after Lupin, he resigns and declares that he will chase Lupin as a citizen. While in Tokyo Crisis, he continues to investagate even after having been suspended.

Zenigata was originally with the Tokyo Metropolitan Police, but joined Interpol after meeting Lupin. While in France, he turned to corruption after being assigned "a low paying, thankless job" because it "was the only way for a guy like me to make it to the top." However, he eventually reported himself to his superiors after witnessing Oscar risking his life to protect his one franc by jumping into a river. After pulling Oscar out of the water, he adopts the boy who grows up to be his second in command and lieutenant.

His obsession has unfortunately put a strain on his marriage and his relationship with his daughter Toshiko (however, this has only ever been mentioned once, in The Mystery of Mamo). In episode 100 of the Red Jacket Series, Zenigata is asked if he has any sons, and states no. He is asked if he has any family and replies, "no". However, this can be attributed to the fact that he is divorced.

Although perpetually unable to permanently detain Lupin, Zenigata has proven over and over again that he is extremely capable. He is shown to be able to take down every member of Lupin's gang with ease.

Zenigata's signature weapon is a pair of handcuffs which are often attached to rope for long ranged attacks. He is able to throw cuffs with almost unhuman accuracy and has never once missed, although Lupin is able to escape within seconds.

He is also skilled at hand to hand combat. In Dead or Alive, a group of soliders confront him while he is eating. He doesn't even get up from the table but still manages to incapacitate all the soldiers (then proceedes to leave money on the counter, stating that the soldiers will probably need some coffee when they come to). In Another Page, he quickly takes down two hitmen. In Angel Tactics, he manages to fend off a hoarde of Bloody Angels minions with Lupin, surprising even Lupin. He also defeats several at once using his hand cuffs throwing technique combined with hand to hand combat.

Although not shown often, Zenigata is also skilled at inventing gadgets. In the episode "Rose and the Pistol" in the Red Jacket Series, he creates a pair of thumb cuffs (dubbed Zenigetchas) which manage to completely stump Lupin. In fact, Lupin himself is unable to escape them until Goemon slices them with Zantetsu. In episode 114 of the Red Jacket Series, he invents a train link that can not be uncoupled. In Farewell to Nostradamus, he creates the "Lupin Catcher", a metal detector-like device that beeps when Lupin is near and a chain of handcuffs to hold all four members of Lupin's gang at once.

Zenigata has been shown to be adept at riding a motorcycle (episode 90 of Red Jacket Series, The Legend of the Gold of Babylon, Elusiveness of the Fog and Greatest Capers)

Zenigata's ability to capture Lupin increases steadily as the series progresses. By the end of the Red Jacket Series, he has already come up with several, extremely inventive plots to prevent Lupin from getting his target. Whereas in the start of the Green Jacket Series, Lupin often excapes him by very simple means.  In the special Operation: Return the Treasure alone, he is able to catch Lupin 3 times. In Seven Days Rhapsody, he discovers that one of the riders in a horse race is Lupin in disguise and calls the bomb squad before removing Lupin's exploding mask. In Sweet Lost Night, he is able to predict all of Lupin's escape methods.

Zenigata has shown his skill on more than one occasion, leading the viewer to wonder about his true capability. In one episode of the Red Jacket Series, he seeks Lupin's help in returning an item he stole and his passion allows him to easily defeat the gang who are impressed by his skill. In episode 135 of the Red Jacket Series, Zenigata realizes the gang's lives are in danger, so he creates and deploys a simple plan to capture them for their own safety. Within minutes he has captured all three and have them handcuffed to a tree. Lupin comments on more than one occasion that it's a shame Zenigata is a cop.

Zenigata's obsession when he gets upset or close to Lupin seems to give him superhuman abilities. In The Hemingway Papers he is trapped in an underground cell, but manages to break the door down when he gets angry enough. In Island of Assasins, he flatlines but returns to life after just hearing Lupin's name. In Lupin III vs. Detective Conan, Conan unintentionally used the Stun-Gun Wristwatch on him only for Zenigata to wake up 30 seconds later, greatly shocking even Conan who finds such tenacity monstrous as even an elephant would need to be asleep for 30 minutes. He also repeatedly breaks handcuffs with his teeth.

Zenigata has an attachment to Lupin with the belief that no one should kill him or worse, capture him, besides Zenigata himself.

Lupin's opinion of Zenigata is a little less caring, but still filled with respect. Once when Zenigata tried to warn Lupin that someone was out to kill him, Lupin replied by saying that it was too bad he was a police officer. He often seems amazed that Zenigata can keep up with him. At times he's overwhelmed by how much thought Zenigata has put into his traps for Lupin. Once, when Lupin thought Zenigata was dead, he sought to take down his supposed murderer.

Ever since the Red Jacket Series, Lupin has called Zenigata "Pops" (or "totsan/totchan"). Zenigata has never once complained about the nickname. Based on the big puppy eyes he gives Lupin at times when he seems glad to see him, he may even like the nickname. In The Fuma Conspiracy, Zenigata is so upset about the manner in which Lupin supposedly died that he becomes a Buddhist monk.

While he has some interest in capturing Jigen, Goemon, and Fujiko, he is really after only Lupin. Jigen seems to have a genuine fear of being caught by Zenigata.

Zenigata is based on a famous Japanese crime fighting character named Heiji Zenigata. The character is a few hundred years old and was best known for throwing coins as a weapon. Zenigata's handcuff throwing technique is his own take on the character's choice of weapon. 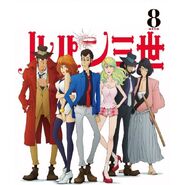 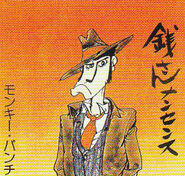 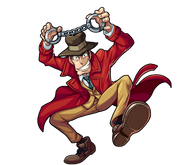 Retrieved from "https://parody.fandom.com/wiki/Koichi_Zenigata?oldid=2566183"
Community content is available under CC-BY-SA unless otherwise noted.