Koji (Japanese: ユウジ Yūji) was the character of the day of the Pokémon anime who appeared in the episode Good 'Quil Hunting. He was a brash young Trainer who wanted a Cyndaquil, and ended up competing with Ash to catch one in a forest. Even though Ash caught one first, Koji pressured Ash into a battle, with the prize being the Cyndaquil Ash already captured. Against Brock's better judgment, Ash accepted the challenge and had Cyndaquil battle Koji's Sandslash. During the battle, Koji was shown to be a confident Trainer with a powerful Pokémon. He is not a kind Trainer, and pressured his Sandslash to continue the battle even though it was exhausted. Despite having a disadvantage, Cyndaquil was able to use its speed and Tackle attack to defeat the Sandslash. Koji then decided to try to steal Cyndaquil anyway in a net, only to get badly burned when it used a Flamethrower at him, causing him to run away. As he fled, Brock yelled after him that he should train himself before training any more Pokémon. 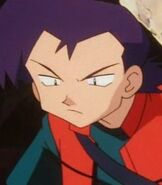 Add a photo to this gallery
Retrieved from "https://parody.fandom.com/wiki/Koji?oldid=1756568"
Community content is available under CC-BY-SA unless otherwise noted.