Kronosaurus (/ˌkrɒnoʊˈsɔːrəs/ KRON-o-SAWR-əs; meaning "lizard of Kronos") is an extinct genus of short-necked pliosaur. With an estimated length of 9–10.5 metres (30–34 ft), it was among the largest pliosaurs, and is named after the leader of the Greek Titans, Cronus. It lived in the Early Cretaceous Period (Aptian-Albian). Fossil material has been recovered from Queensland in Australia, and from the Paja Formation in Boyacá, Colombia, and assigned to two species. 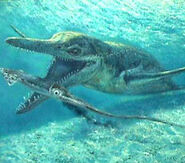