The Parody Wiki
Register
Don't have an account?
Sign In
in: Zoom Cast, Zoom Boys, Zoom Season 6,
and 20 more

Guest Appearances on Other Shows

My whole family just fits together. My Mom and Dad are great together, and my sisters are the best. They're all the most important people in my life. They're wacky and fun, very cool to be around. We say two prayers a day, love to go to the beach and eat out at restaurants.

My favorite sandwich is jalapeños, salami, bologna, cheese, ham, oil and vinegar, but if I could only take three foods to the moon, I'd take: tacos, spinach, and French meat pie. Even though some of my favorite books are The Witches and the Fingerprints Series, if I could be any character from a book, I'd be Harry Potter because he gets in awesome adventures.

To be a good friends

You have to support someone no matter what, and you have to know how to forgive!

And to all the ZOOMers out there

Being on ZOOM has made me realize that you can do anything you put your mind to. So, follow your dreams! 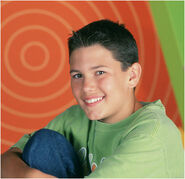