The Parody Wiki
Register
Don't have an account?
Sign In
Advertisement
in: Females, Female Characters, Characters,
and 59 more

Lady is the female protagonist in Walt Disney's 15th animated classic, Lady and the Tramp and a minor character in the less successful 2001 direct-to-video sequel (since her son Scamp took over as the star in the spotlight). She is the pet of Jim Dear, Darling, and Jim, Jr., Tramp's wife, Jock and Trusty's friend, Si and Am's arch-rival, and the mother of Annette, Danielle, Collette, and Scamp. In the franchise, she was voiced by the late Barbara Luddy in the original film and later Jodi Benson (who also voiced Ariel in The Little Mermaid franchise) in the sequel.

The Secret of NIMH (Baloo The BearFan360 Animal Style) and Kit Meets Lady She Played as Mrs. Brisby

she is a Mice

Sle Played as Clarice in Tramp the Red-Nosed Dog

she is a Genie

Skippy (a.k.a Dumbo) She played as Elephant Catty

The Scooby Doo of Notre Dame

She'll play a sexy, sassy, bold, vivacious, attractive, fierce, street-wise, beautiful, and compassionate gypsy girl, Esmeralda, who befriends a naïve great dane named Quasimodo (played by Scooby-Doo), whose mother was murdered by the cruel Judge Claude Frollo (played by Carface Carrunthers), and ever since was raised by him in his puppyhood. When she learns that he thinks he's a monster, she needs to help him overcome his fears of being rejected by the crowd and to accept himself for who he is. She is stalked by Frollo, who is lusting after her. She even falls in love with a handsome solider (played by Tramp), who deep inside is not like the other thug-like canine soldiers.

The Princess and the Dog She played as Frog Tiana

Beauty and the Genie (nikkdisneylover8390 Style)

She will play as a beautiful bookworm, Belle, who wants more than a provincial life in her hometown, living in a cottage with her father, Maurice (Patou), an inventor ridiculed for his ideas considered "crazy". A vain, arrogant, rude, and selfish canine hunting dog she strongly dislikes named Gaston (played by Steele) who unsuccessfully tries to flirt with her, and vows to marry her at any cost to be his "little wife". When her father is imprisoned at a dark castle, she agrees to be the prisoner. Along her imprisoned life in the castle, she falls in love with one who imprisoned her, a Beast (played by the Genie), who deep inside has a very big heart, and is actually a prince under an enchanted spell (Tramp).

She will play as a girl, Amy, who befriends a sweet and innocent girl, Michelle (Played by Jenna). She bleeds to death after Rita (Played by Metal (Balto 1.5)) puts a shard of glass in her mouth and then punches her in the jaw. Her body is shown again later on when Michelle discovers her.

She played as the beautiful mermaid, Princess Ariel, the youngest daughter of King Triton (played by Patou), who strikes a bargain with an evil, sadistic, and nasty sea witch named Ursula (played by Madame Medusa) in her quest to win the heart of a handsome prince on land (played by Tramp), and not only explores the mysteries of her strange new world, but also discovers the meaning of "true love".

The AristoDogs She played as Duchess

The Great Courage Detective She played as Mrs. Judson

Cub and Company She played as Georgette

Sawyer in Wonderland She played as Iris

Edmond & Company She played as Rita

Ladyrella She played as Adult Cinderella

She plays as a beautiful Russian princess named Anastasia Romanov who loses her memory of her family life after her parents (played by Pongo and Perdita) and siblings were assassinated in a homicide on the 300th anniversary of the Romanov dynasty. Years later, she vows to find her true identity. Along the way, she meets a handsome dog named Dimitri (played by Tramp) and his faithful companion and friend, Vladimir (played by Thomas O'Malley). As she travels, she discovers her rightful place as the Grand Duchess of Russia, reuniting with her grandmother (played by Bambi's mother) and battling a nasty villain (played by Kazar).

The Sleeping Vixen She played as Merryweather

Piglet Pan She played as Tinkerbell

Danny Pan She played as Nana

She'll play a beautiful Arabian princess, Jasmine, a young cocker spaniel who wants to marry a prince dog only for love, rather than for power or for her beauty. She meets a a poor dog from the streets (played by Tramp), who is longing for a better life than being homeless, constantly being called a street rat. When she gets to know the "prince in disguise" better, she and her friends later battle a nasty villain (played by Buster), who wants to take over Agrabah, and later discovers her "prince"'s identity, and happily chooses him as her fiancé.

She is a rabbit

Lady played as Buckwheat's Mother in The Little Rascals (animalized)

She is a Mother

She is a Blues player 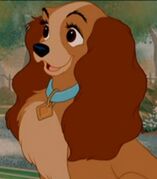 Lady in Lady and the Tramp 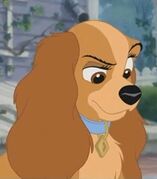 Lady in Lady and the Tramp 2: Scamp's Adventure 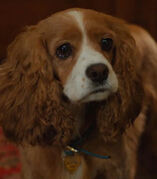 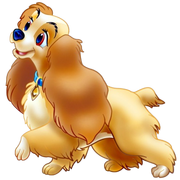 Lady and Tramp as humans 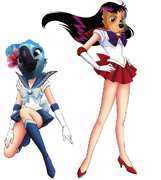 Lady in a dress 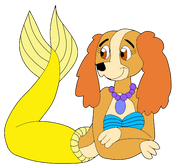 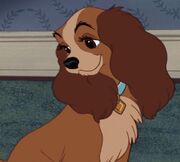 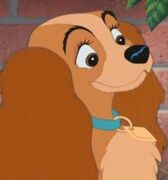