The Parody Wiki
Register
Don't have an account?
Sign In
Advertisement
in: Male Characters, Characters, Villains,
and 32 more

Lampwick is a minor villian in 1940 Disney's Pinocchio.

Lampwick meets Pinocchio on the Coachman's stagecoach, and the two quickly become friends. Though Lampwick has never been to Pleasure Island, he has heard great things about the fun they can have there. Pinocchio and Lampwick spent their free time roughing up other boys, vandalizing property, smoking, eating, drinking beer, and playing pool. At the pool hall, it becomes apparent that they seem to be the only boys left at the park, though Lampwick doesn't seem to care, and doesn't even suspect anything to be awry.

When Jiminy Cricket arrives at the island trying to convince Pinocchio to leave, Lampwick is quick to shoot him down, stating Pinocchio was foolish to "take orders from a grasshopper". Jiminy is insulted, but Pinocchio defends him, saying that Lampwick is his best friend. After Lampwick continues to harass him, Jiminy leaves the two boys in a huff.

In one of the more frightening scenes, while he and Pinocchio are playing pool, drinking, and smoking, he and Lampwick start transforming into donkeys. First, Lampwick grows donkey ears, a tail, and his head completely transforms. The transformation is not painful, as evidenced by Lampwick's ignorance of his condition. However, this also creates a paradox in the film: Pinocchio does notice when his ears and tail grow in, even though Lampwick does not. It is theorized that Lampwick's overly-intoxicated condition led to his ignorance of the changes.

When Pinocchio sees Lampwick's ears transform into donkey ears, he becomes suspicious and immediately stops drinking. Lampwick then grows a donkey tail (ripping through his pants), complete with a long hairy black tassel that sweeps across the floor, prompting Pinocchio to stop smoking. After Lampwick's head completely changes, Pinocchio laughs at him when Lampwick asks if he looks like a "jacka**," because he literally does. Lampwick doesn't notice these changes until he accidentally brays while laughing at Pinocchio, who had also brayed by accident when laughing at him. He covers his mouth with terror and asks "Did that come out of me?", to which Pinocchio nods. Lampwick then touches his mouth and notices it feels different. Then he touches his face and feels it covered in hair; finally he feels his ears only to find that they have grown longer. He immediately grabs them, sees this change and asks what is going on. When he sees that he is now half-donkey in a mirror, he panics and begs Pinocchio for help.

All the while, Pinocchio was watching the whole thing, but had no idea what to do and couldn't think of any advice. Lampwick yells at Pinocchio to "call that beetle, call anybody", not realizing that Jiminy, having learned of the island's curse, was already on his way. Then Lampwick's hands and feet became hooves, and now his body was covered in hair. Lampwick cried for his mother as he was forced onto four legs and threw off his hat, completing his transformation into a donkey. He loses his ability to speak, and begins braying and kicking wildly. He destroys the pool hall with his hind legs, breaks a mirror, kicks his clothes off, and then flees the scene braying in terror.

It was never shown onscreen what happened to Lampwick, but he was likely caught and sold by the evil Coachman.

Lampwick can be seen as both a villain and ally of good in the film in two ways. As a villain, he influences Pinocchio into behaving the same way he does and antagonizes Jiminy, while as an ally of good, he befriends Pinocchio and stays in good terms with him until his awful fate.

He Played Jafar In Jiminyladdin

He is a Hero of Never land 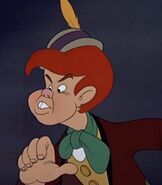