Lenny the Gorilla is a guest who claims from Africa, and appears in the eleventh episode of The Animal Show. He tells Stinky and Jake about gorillas and how they're an endangered species.

When he's first introduced, he acts wild and attacks Stinky, until Jake calls Yves St. La Roach to bring in a plant for Lenny to eat in order for him to calm down. He later sings "The Gorilla Song." 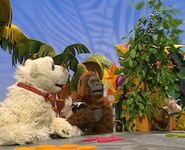