The Parody Wiki
Register
Don't have an account?
Sign In
Advertisement
in: Characters, Animals, Antarctic Animals,
and 111 more

Like its terrestrial namesake, the leopard seal (Hydrurga leptonyx) is a formidable hunter with a sinuous body and powerful jaws that open widely to reveal exceptionally long canine teeth. The head is large and reptile-like, while the neck is long and flexible, allowing it to pull the head backwards before striking prey like a snake. Unusually for a true seal, it swims with graceful simultaneous strokes of large, elongated fore-flippers, providing both speed and manoeuvrability. In addition to the menacing canines, which are adapted for seizing larger animals such as penguins and seals, it also has a set of unusual interlocking molars that are used as a sieve for krill. Adults have a silvery-grey to black coat, with variable dark spots and a paler underside. Juveniles, however, have a much softer, thicker coat with a dorsal stripe, and a light gray underside, peppered with dark spots. Although the sexes are similar in overall appearance, unusually for a seal, the female is slightly larger than the male. 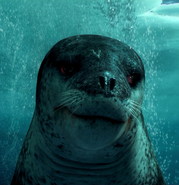