The Parody Wiki
Register
Don't have an account?
Sign In
in: Characters, Animals, Extinct Animals,
and 10 more

Leptoceratops is a genus of primitive ceratopsian dinosaurs from the late Cretaceous Period (late Maastrichtian age, 66.8-66 Ma ago) of what is now Western North America. Their skulls have been found in Alberta, Canada and in Wyoming. Leptoceratops could probably stand and run on their hind legs: analysis of forelimb function indicates that even though they could not pronate their hands, they could walk on four legs. Leptoceratops was around 2 metres (6.6 ft) long and could have weighed between 68 to 200 kilograms (150 to 441 lb). 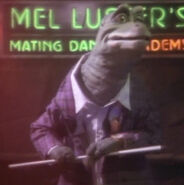