The Parody Wiki
Register
Don't have an account?
Sign In
Advertisement
in: The ocean hunter creatures, Villains, Mythical Creatures,
and 41 more

Leviathan (Hebrew: Livyatan) in Jewish mythology, a primordial sea serpent. Its source is in prebiblical Mesopotamian myth, especially that of the sea monster in the Ugaritic myth of Baal (see Yamm). In the Old Testament, Leviathan appears in Psalms 74:14 as a multiheaded sea serpent that is killed by God and given as food to the Hebrews in the wilderness. In Isaiah 21:1, Leviathan is a serpent and a symbol of Israel's enemies, who will be slain by God. In Job 41, it is a sea monster and a symbol of God's power of creation. 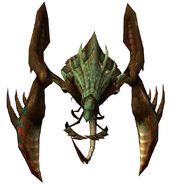