Lillie Lightship is a special and much-loved lightship, placed at Dem Der Rocks to warn shipping of potential hazard. The Star Fleet have the contract to provide her with the necessary fuel to keep her light shining.

She appeared for the first time in a small role in "Sunshine", although she had more important roles in later episodes, particularly the episode Regatta (also known as 4th July), in which she was hit by a blinded tramp steamer that made a hole in her side. She was saved by Grampus, and repairs at Lucky's Yard allowed her to view the annual regatta. In the second episode, Pirate, she was muffled by the pirates. Lillie's light failed for a second time in the episode Bigg Freeze, which meant that the Star Fleet needed to find another source to guide Hercules into the estuary with the ocean liner S.S. Vienna. Hercules appears to have a "special place in his heart" for Lillie. Lillie is a friendly and cheerful lightship and has a good friendship with the Star Tugs. She is polite to the Z-Stacks but does not particularly like them. All the Star Tugs value her opinion and put high priority on her well-being. 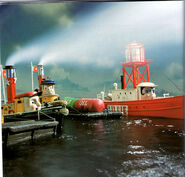 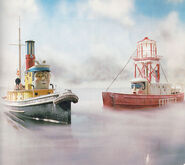 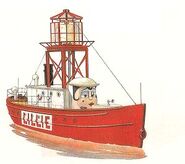 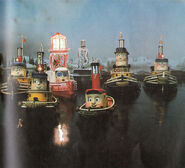 Retrieved from "https://parody.fandom.com/wiki/Lillie_Lightship?oldid=779249"
Community content is available under CC-BY-SA unless otherwise noted.