The Parody Wiki
Register
Don't have an account?
Sign In
Advertisement
in: Pixar Characters, Screaming Characters, Chefs,
and 17 more

Linguini is a chef from Ratatouille

Linguini, at the beginning of the fim, is a very unsure and clumsy individual. He mentions that he has never had anyone expect anything from him before and has lost many jobs prior to his job (which seems to be partly attributed to his clumsiness). However, he is a very kindhearted person, as shown when he wouldn't drown Remy after looking into his eyes. However, he did hold some distrust of Remy, as shown when he woke up the next morning and saw Remy's bed empty and his eggs stolen, saying, "I knew I shouldn't have trusted a ra...." before he saw Remy cooking, and quickly took it back. Later, his trust with Remy deepens after they realize Remy can control Linguini's body using his hair and the two spent the night perfecting the body manipulation. His kindness was also shown when he genuinely thanked Colette for her help, rather than complain about her training as being hard.

Linguini is shown to fail as a cook , since he runied the soup that Remy had to fix in the beginning of the film and has been shown to have numerous take out boxes in his fridge. However, he has shown skills at skating, which helped him become a waiter when Remy and Colette were cooking the night Anton Ego was going to critique their restaurant, and later as the waiter for his and Remy's restaurant La Ratatouille.

After he learns about his heritage as Gusteau's son and inherits the restaurant, he starts to neglect Remy and forget that he is the reason for his success, instead giving the credit to Colette and himself and even gets rid of Remy after learning he was stealing food from the fridge to give to his rat colony. However, he later came to understand that he needed Remy after realizing that without Remy and his abilities to cook he would not have had the amount of success he had. He even tells the rest of the staff the truth about Remy as he becomes tired of lying and taking the credit from Remy, despite knowing the staff might think he was crazy (which happened and caused them to leave).

Linguini is also somewhat naive and trusts others too easily. He trusted Remy to help him with cooking (after Skinner threatened to fire him if he couldn't remake the soup that Remy made), which Remy initially took advantage of in order to be set free. However, Remy quickly returned to him after seeing how sad Linguini was over his deception. He also seemed to be unaware of the animosity and suspicion Skinner had towards him, managing to avoid his dirty tactics either by pure luck or with the intervention of Remy. He also trusted Remy to blindfold him while Remy practiced manipulating his body to cook, despite causing him injury multiple times and defended Remy when the kitchen staff were about to kill him.

He cares greatly for Remy, whom he treats as his equal and best friend, and his girlfriend Colette, with whom he has be

en in love with since he first saw her and with whom he develops a close romantic relationship with. Overall, Linguini is a kindhearted, yet clutzy person who tries his best to help others and moves people with his kindness and honesty. 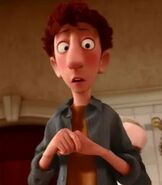 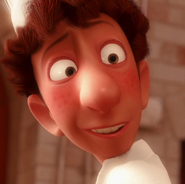 Linguini is shocked at Remy

Ratatouille is coming to theaters

one of the most powerful scream on Linguini