The Parody Wiki
Register
Don't have an account?
Sign In
Advertisement
in: Characters, Animals, Asian Animals,
and 31 more

The lion-tailed macaque (Macaca silenus), or the wanderoo, is an Old World monkey endemic to the Western Ghats of South India. The hair of the lion-tailed macaque is black. Its outstanding characteristic is the silver-white mane which surrounds the head from the cheeks down to its chin, which gives this monkey its German name Bartaffe - "beard ape". The hairless face is black in colour. With a head-body length of 42 to 61 cm and a weight of 2 to 10 kg, it ranks among the smaller macaques. The tail is medium in length, about 25 cm, and has a black tuft at the end, similar to a lion's tail. The male's tail-tuft is more developed than that of the female. Gestation is approximately six months. The young are nursed for one year. Sexual maturity is reached at four years for females, and six years for males. The life expectancy in the wild is approximately 20 years, while in captivity is up to 30 years. 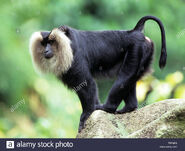