Little Bear is a fictional character and the main protagonist in the animated television series Little Bear. He is voiced by Kristin Fairlie and first appeared on television in the series' pilot episode "What Will Little Bear Wear?" on November 6, 1995.

Little Bear is a feisty, curious and imaginative grizzly bear cub who lives in the forest with his family and friends, including Emily, his best friend. Throughout the series he did grow somewhat, as his voice became slightly deeper and he did not take naps as often.

Little bear and all his animal friends are always barefoot and without clothes, while the adult characters like Mother and Father Bear are usually seen wearing shoes and clothes. Despite this, he has worn clothes on certain occasions, like a scarf and winter hat when the weather is cold, a fishing hat when taken fishing, and finally, on one occasion, a black dress suit with a red necktie and black shoes.

In Season 1, his whole body (including Head, Arms, Torso, and Legs) was in a clumsy-style.

In Season 2-4, his whole body was now in a much fancier-style and not too cartoony.

In Season 5 (when it was the season where the animation was made with an Animation Software), his whole body look the same (as Season 2-4) some times in the episodes. But sometimes in the episode, his head was a 50% cartoony, and some of the other parts of his body was 25% cartoony.

Little Bear as a Giantess

Little Bear as the Hippopotamus 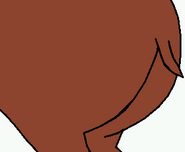 Hippo Little Bear and the Mermaid

Hippo Little Bear and Emily on the Nature Hunt

Hippo Little Bear in the pond

Hippo Little Bear and No Feet

Gallery of Little Bear and his girlfriend Sister

Retrieved from "https://parody.fandom.com/wiki/Little_Bear?oldid=2541346"
Community content is available under CC-BY-SA unless otherwise noted.