The Parody Wiki
Register
Don't have an account?
Sign In
Advertisement
in: Females, Pretty Girls, Girls,
and 36 more

Red is the titular character from the Little Red Riding Hood story and one of the main characters part of the Super Readers. She is a kind, cute and pretty but outspoken and bold young girl who can be a little rude every now and then. But she always means well and when she isn't hanging out with her friends, she can be found playing with Little Boy Blue, another friend.

Red has lightly tanned skin and a a scattering of freckles below each brown eye. She has long brown hair worn in low pigtails held by red scrunchies with her bangs loosily brushed at the center of her forehead. She is often depicted with a red helmet or hat. Her normal outfit consists of a red parka with white lining, pocket flaps, and a string at the center of her neck, a red pleat skirt, and red shoes with short white socks and built-in rollerskates.

Other outfits worn by Red include

Red is a friendly and caring girl who tries to do whatever she can to help others; especially her friends. She can be childish from time-to-time, or tempermental when thing don't go the way she had hoped - but her intentions seem to always mean well in the end, even when she fails to express them properly. Her top priority is always making others have a good time and cheer up if they feel down. Despite her cuteness and beauty, Red appears to be a tomboy, and isn't as feminine as most of the girls appear to be in the series. However, she doesn't mind doing things that Princess Pea or the other girls do either. She is very enthusiastic with most things, but seems to show some concern over not fitting in during certain events or situations. She lives in a small red house near the forest. Red lives a few miles away from her grandmother, whom she loves very much. She also loves her puppy and red velvet cake.

Transformed, Red becomes Wonder Red. With Word Power she is able to transform an item into something else, remove the item, or even use it to find the correct item she needs. She is able to do this using her Word Basket and singing a small rhyme while thinking of what she needs.

In this form, her hair is worn in braided pigtails and her hat becomes a red and purple helmet. Her shoes turn into purple rollerskates accented by lavender and red, while her outfit is now a purple and red two-piece bikini (only with a pair of very long braids) with a red belt with a spiral in the center. She wears a long flowing red cape, a pair of purple and red skate gloves and a pair of kneepads.

In the syndicated version, sparkles were added to her costume to match Princess Presto's outfit.

Wonder Red's Why Flyer resembles an airborne scooter. It's red and smooth with purple lining, wings, parts on top, seat, and sheels underneath. Her why flyer lacks the glass piece in front of her, due to her holding onto its handles when flying around. A spiral mark is on the front to match her belt. The question mark trail that flies from the why flyer is a scarlet-red color.

As stated, Red lives some distance away from her grandmother, her only known relative. Even though Red's parents are obviously around, there is no information about them. It is unknown whether she lives with one or both parents.

Red cares deeply for her and loves to help her grandma and tries to think of new ways to show her how much she cares about her. She also loves to eat Grandma's delicious snacks!

Red also has a pet puppy she is sometimes seen with near the end of Season 1 when she gets her. But unlike Puppy, she is not part of the Super Readers group. 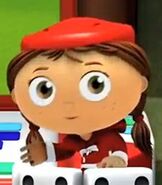