The Parody Wiki
Register
Don't have an account?
Sign In
Advertisement
in: Animals, Males, Characters,
and 34 more

Pig was the final fourth member of Super Readers. He is the Littlest Pig in his family, but is only called/known to most as Pig. He loves to build and make things while pretending to be a construction worker like his Poppa Pig.

Pig is usually friendly and in a good mood, but he often has to deal with more dominant people bullying or harassing him until he gets angry or upset. But with a little help from his friends and the powers of Alpha Pig, he'll be defending himself by the end of the day!

Pig, like the other Super Readers, is very friendly and usually happy with a passive, gentle nature. He loves to play with others and build mostly-anything, but it's easy to frustrate or upset him when dealing with any type of problem, even if it's not really a big deal. However, he is often a target of being bullied or harassed by others, on purpose or by accident.

At first, Pig has trouble standing up for himself and he has shown cowardly streaks. But with some help from his friends he'll stand up for himself or anyone who may have been hurt in the process and tell the person how he feels and how badly they acted.

Pig also sometimes has problems dealing with the fact he's the youngest pig out of three: his two older brothers often think he cannot do certain things and believe he is too little to do most things, such as adventuring or building a specific object. So they tend to generally ignore him.

While he does come off a little nervous and easily frightened, Pig is always willing to lend a hand and cares very much when someone is in trouble!

As stated, Pig and his brothers look up to their father and as such they all seem to dress the same in the Pig Family. Like all Pig's he is pink-tan skinned with slightly flopped ears and a snout. His eyes are bright blue. Pig is normally wearing a yellow t-shirt with a pair of blue jean overalls and a white hard-hat/cap. His shoes are plain brown work boot-shoes.

At the beach, Pig wears a teal shirt with yellow and white markings, a pair of blue swim trunks, jean-blue shoes, and an orange and yellow fishing hat. Typically worn by males at the beach.

On Halloween, Pig dressed up as a dragon, wearing a green cap on his head with a nose, small white fangs, purple eyes, yellow hair in the middle of its head, and big white horns. He also had a green tail attached to the outfit.

Alpha Pig usually uses his skills to build or fix items. To do this he simply builds his wooden letters and then uses them to build or fix the desired object in question by spelling a word resembling it. He is also resourceable and can follow alphabet trails, either by connecting a capital letter with lowercase letters, or by just looking for the right pathways.

As Alpha Pig, Pig wears a blue-purple one-piece suit with orange markings and tool-belt with a triangle in the center, a yellow cape, orange, brown, and yellow sneakers, and an orange hard-hat with a very tiny propeller that pops out. He also wears goggles over his eyes, most likely to protect them. In the syndicatedversion, sparkles were added to his costume to match Princess Presto's costume, with his cape, shirt, and shoes sparkled. When the Super Reading powers upgrade came into effect, his outfit added gold work gloves. His cape became sparkly gold with yellow lining.

Pig's Why Flyer is purple-blue with orange and yellow wings on each side, and a single wing on the back with a small purple-blue fan piece. Inside of his Why Flyer is yellow and orange with a glass piece in front of him and a wheel. His Why Flyer also has a big purple-blue propeller on top, right behind him. Its question mark trail is pale orange.

As said, Pig is the littlest pig in his family. He has two older brothers, one wearing green the other wearing red. The three brothers try to work together but often argue over how to do things or in which order to do them... 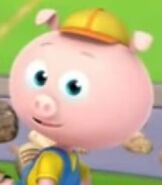 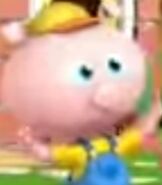 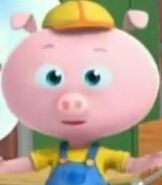