The Parody Wiki
Register
Don't have an account?
Sign In
Advertisement
in: Characters, Animals, North American Animals,
and 18 more

A common and widespread species, the long-eared owl (Asio otus) can be recognised by its orange eyes, prominent ear tufts, and rounded, buff or rufous facial disk. The plumage is a mixture of black, brown, grey, buff and white on the upperparts, and whitish-grey and buff, with dark brown streaking and barring on the underparts. The wings are long and rounded, with a buff patch on the upperwing and a dark crescent below. Other distinctive features include conspicuous white eyebrows above the eyes and a white patch below the beak, along with densely feathered legs and toes. The feathers of this species are specially adapted so that, even when beating its wings, flight is almost noiseless. During the breeding season, the male produces a distinctive advertising call consisting of a low "hoo, hoo, hoo” repeated 10 to 200 times, which the female responds to with a raspy buzz. When alarmed, this species will also make a barking “ooack, ooack, ooack” sound. There are four subspecies of long eared owl, which vary in geographical location and appearance. A proficient hunter, the long-eared owl catches mice in complete darkness by using sound to locate its prey. After catching its prey, the long-eared owl usually swallows its victim whole! 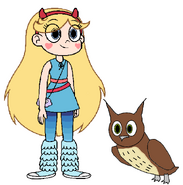