The Parody Wiki
Register
Don't have an account?
Sign In
Advertisement
in: Characters, Animals, South American Animals,
and 56 more

The long-wattled umbrellabird (Cephalopterus penduliger) gains its name from the rather bizarre and striking features of the male of the species. The male bird has a large crest, composed of hair-like feathers, extending over the bill, and a long, black feathered wattle hanging from the middle of the chest. The wattle reaches a length of up to 45 centimetres and can be inflated during courtship, when it resembles a large, open pine cone. During flight, it is retracted and held against the chest. The female and juvenile resemble the male but are smaller, and both the crest and wattle are greatly reduced. The long-wattled umbrellabird is usually silent, except during displays, when the male makes a protracted grunting noise, as well as a low-frequency booming call that is audible to humans at a distance of up to one kilometre away. 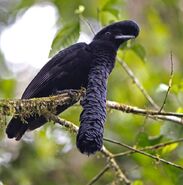 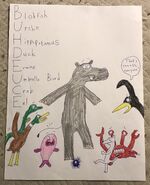 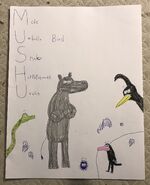 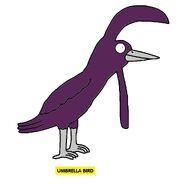 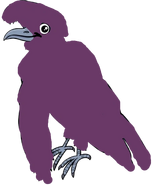 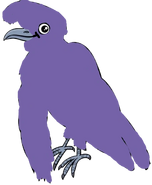