Lord Drakkon[1] was an evil Power Ranger who controls the Black Dragon and battles the Power Rangers. He is the cruel older version of Tommy Oliver from an alternate reality who rules his Earth with an iron fist from a dystopiac and futuristic Angel Grove.

He's also known as Mysterious Ranger and an evil counterpart of Tommy Oliver. He became more powerful than ever before, he can command the Ranger Sentries and join to the good side after he defeats Dark Kahn while saving Adagio's Life and he joins the Freedom Squad.

Using the role of an Antagonist Hero/Protagonist Villain

He's a Konquer of Realms

Joining on the good side of the heroes. 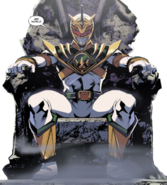 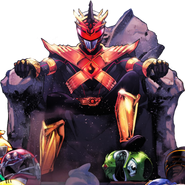 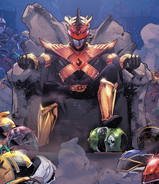 When being fused with Linnux

Retrieved from "https://parody.fandom.com/wiki/Lord_Drakkon?oldid=1919027"
Community content is available under CC-BY-SA unless otherwise noted.