The Parody Wiki
Register
Don't have an account?
Sign In
Advertisement
in: Pure Evil, Bullies, Villains,
and 39 more

Lotso (full name Lots-o'-Huggin' Bear) is Kids World's evil half-cousin who is one of the main villains of the Pooh's Adventures of Toy Story saga (The other ones bein Sid Phillips and Stinky Pete).

Lotso is a pink teddy bear who is the former leader of Sunnyside. He was once owned by a little girl named Daisy, who got him as a Christmas present. Daisy loved Lotso so much that she did everything with him. But one day, Daisy's family took a drive, hit a rest stop and had a little playtime. After lunch, Daisy feel asleep and accidently lost Lotso, Big Baby, and Chuckles. They waited and waited and waited for her to return, but Lotso wouldn't give up on her. It took forever until they finally made back to Daisy's home. But by the time they arrived, it was revealed that Daisy got a new Lotso Huggin Bear toy which lead Lotso become heartbroken. Since then, Lotso believed that Daisy replaced all toys. But his friends try to comfort him telling him that she only replaced him, but Lotso refused to listen. He angrily snaps at them saying that she replaced all of them. He then forced his friends to leave her home behind and they hitched a ride on a Pizza Planet truck leading them to Sunnyside Daycare. Soon, Lotso and Big Baby took over Sunnyside and rigged the whole system. Unfortunately, Chuckles the clown got broke and was found by Bonnie and took him home but the other toys at Sunnyside weren't so lucky.

He played as Prince John in Orinoco Hood

He is from the Earth Kingdom

He played as Old Jafar in Hiccup (Aladdin) and Olladdin

He played as Archibald in Sniffles in New York

He played as Gigantic Genie in Kermiladdin

He is a genie

He played as Miles Axelrod in Mammals 2 (Cars 2)

He is a car

He played as Superman in The Squidward Movie

He is a Super Heroes 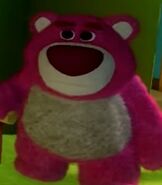 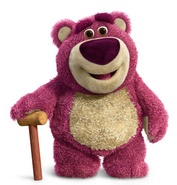 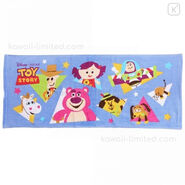