Start a Wiki
Recognized as the official mammal of its home state, the Louisiana black bear (Ursus americanus luteolus), one of the 16 subspecies of American black bear, is found in parts of Louisiana, mainly along the Mississippi River Valley and the Atchafalaya River Basin. It was once classified as 'threatened' under the U.S. Endangered Species Act from 1992-2016. The subspecies does not have a substantially different appearance than the nominate U. americanus americanus, but the skull is relatively long, narrow, and flat, and the molars are proportionately large. Fur color is usually black but a cinnamon phase is known to exist. The Louisiana black bear historically occurred in Louisiana, Mississippi, East Texas, and Arkansas. 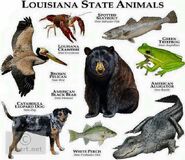 Retrieved from "https://parody.fandom.com/wiki/Louisiana_Black_Bear?oldid=2019138"
Community content is available under CC-BY-SA unless otherwise noted.