The Parody Wiki
Register
Don't have an account?
Sign In
Advertisement
in: Pages with broken file links, Characters, Animals,
and 54 more

The macaroni penguin (Eudyptes chrysolophus) is a large, crested penguin, similar in appearance to other members of the genus Eudyptes, but larger than all other species except the royal penguin (Eudyptes schlegeli). Adult macaroni penguins have golden-yellow plume-like feathers that arise from a central patch on the forehead, extending back along the crown and drooping down behind the eye. The head, chin, throat and upperparts are black, the underparts are white, and the flippers are black on the upper surface but mainly white below. The large bill is orange-brown, the eyes are red and there is a patch of bare pink skin from the base of the bill to the eye. The legs and feet are pink. Male and female macaroni penguins are similar in appearance, but males tend to be slightly larger.. Immature macaroni penguins lack the head plumes or have a few sparse yellow feathers on the forehead; their bills are smaller than those of adults and are brownish-black in colour, while the chin and throat are dark grey. The largest gathering of macaroni penguins is on South Georgia Island, with almost 3 million breeding pairs The macaroni penguin's yellow crest feathers reminded explorers of trendy hats worn by 18th century men called 'macaronis'. Although the macaroni penguin lays 2 eggs, the second egg is always larger than the first and is generally the only successful one. An estimated four million tonnes of krill are consumed by macaroni penguins every year. 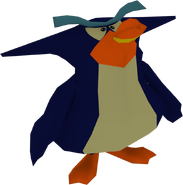 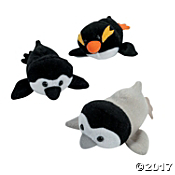 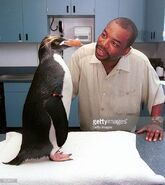 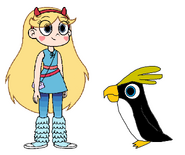