The Parody Wiki
Register
Don't have an account?
Sign In
Advertisement
in: Characters, Animals, South American Animals,
and 30 more

The Magellanic penguin (Spheniscus magellanicus) is a South American penguin, breeding in coastal Patagonia, including Argentina, Chile and the Falkland Islands, with some migrating to Brazil and Uruguay where they are occasionally seen as far north as Espirito Santo. It is the most numerous of the Spheniscus penguins. Its nearest relatives are the African penguin, the Humboldt penguin, and the Galápagos penguins. The Magellanic penguin was named after Portuguese explorer Ferdinand Magellan, who spotted the birds in 1520. The species is listed as being of Least Concern by the IUCN. Magellanic penguins are medium-sized penguins which grow to be 61–76 cm (24–30 in) tall and weigh between 2.7 and 6.5 kg (6.0 and 14.3 lb). The males are larger than the females, and the weight of both drops while the parents raise their young. Adults have black backs and white abdomens. There are two black bands between the head and the breast, with the lower band shaped in an inverted horseshoe. The head is black with a broad white border that runs from behind the eye, around the black ear-coverts and chin, and joins at the throat. Chicks and younger penguins have grey-blue backs, with a more faded grey-blue colour on their chest. Magellanic penguins can live up to 25 years in the wild, but as much as 30 years in captivity. Young birds usually have a blotched pattern on their feet, which fades as they grow up into adulthood. By the time these birds reach about ten years of age, their feet usually become all black. Like other species of penguins, the Magellanic penguin has very rigid wings used to swim under water. 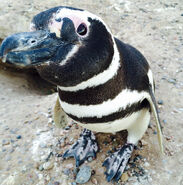 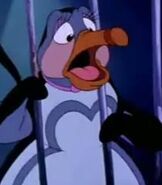 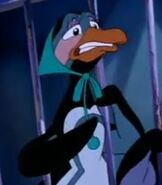 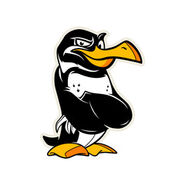 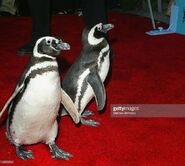