Magic Tales/Magicland Adventures is a PBS Kids Show in 1998. It is a Canadian series produced by Nelvana Limited and Sony Wonder. It ran from September 7, 1998 to November 23, 2004.

Toborr, voiced by Amanda Lutherland, is 5 years old. She commonly appears as the leader of the group until she gave her position to Tom Allen while helping him get used to Magicland. She is Ken's older sister. Her best friend is Callie, and she is perhaps known for saying, "Definitely!" whenever a good idea arises.

Ken, voiced by Bryn McAuley, is 3 years old. He is Toborr's younger brother. For the most part, he and Toborr get along fine, but occasionally have arguments. His best friend is Herman.

Tom Allen, voiced by Kathleen Barr, is 5 years old and Toborr and Ken's new friend who moved from Australia to USA. He is an Australian American boy. He first appears in the beginning of Season 3 and travels to Magic Land with the children. He rides with Jack and Lillie, the two headed human creature like unicorn-pegasus who rarely flew with any human friends prior to Tom Allen's debut.

Herman, voiced by Jamie Watson, is the blue male centaur-pegasus who can turn invisible when he's scared. He is best friends with Ken, who rides on his back. A running gag in the show features Herman making "Magic Corn" by throwing purple popcorn kernels in the air and frying them with his golden horn.

Callie is a shy, demure, and sweet female centaur-pegasus and Toborr's best friend. She possesses a magical tendency to shrink when unhappy, and may occasionally come across as slightly insecure and uncertain, and is prone to worrying. However, Callie is distinguished by her maternal sweetness as a result of her responsibilities as an older sister and babysitter to a humongous myriad of younger siblings, and has been shown to be gifted with great singing and dancing abilities, as revealed in one episode. Callie also is characterized by her color combination consisting of pink. She is voiced by Tracey Lee Smythe.

Jack & Lillie, voiced by Samuel Vincent and Toborr Kristina Tomlinsen (Season 1), and Carolyn Dunn (Seasons 2-3), are a two-headed centaur-pegasus and are siblings; Jack (green) is the male, and Lillie (purple) is the female. Jack prefers to pursue things in a logical manner. Lillie is very messy, loud, and ignorant much to her brother's annoyance, and is perhaps known for saying, "Loooove it!", when she loves something. Jack and Lillie always fly with Tom Allen, although prior to his debut, Jack and Lillie rarely flew with any of their human friends. 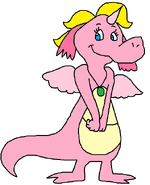 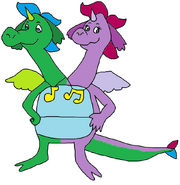 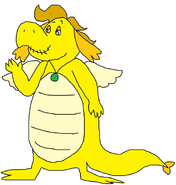 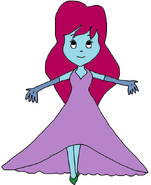