The Parody Wiki
Register
Don't have an account?
Sign In
Advertisement
in: Characters, Animals, South American Animals,
and 42 more

With its extraordinarily long wings and deeply forked tail, the magnificent frigatebird (Fregata magnificens) is unmistakable when seen in flight. The massive wingspan enables the magnificent frigatebird to soar effortlessly, and make graceful aerial manoeuvres, which so captivated Charles Darwin that he dubbed this species “the condor of the ocean”. Frigatebirds are the only seabird family that have obvious, significant differences in plumage between the sexes. The male magnificent frigatebird has entirely black plumage, glossed green on the head and purple on the upperwings and back, and possesses a bare patch of skin on the lower neck, known as the gular sac. This sac can be inflated into a bright red balloon-like organ, which is used to attract females during courtship, while outside the breeding season, the patch fades to orange and becomes barely visible. The female magnificent frigatebird is larger than the male, lacks a gular sac, and has less glossy, brownish-black plumage, with a white patch across the breast and upper belly, three white lines on the underwing and a diagonal off-white line running along the upper wing. Juveniles resemble the adult female, except for the head, which is entirely white. While perfectly adapted for magnificent flight manoeuvres, the magnificent frigatebird does less well on land and sea. It has short legs and very small feet, causing its movements on land to be somewhat awkward; moreover, the plumage lacks a waterproof coating, hence the bird becomes waterlogged and can’t fly if it sits on the water for more than a minute or two. 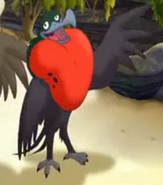