The Parody Wiki
Register
Don't have an account?
Sign In
Advertisement
in: Main Characters, Protagonists, 2007 Version,
and 16 more

Ursula from the upcoming Season 2

Big Mitch, Mr. Pendo, George (in Some Episodes of Season 2)

This girl is one of George's female friends. For an unexplained reason her name changed between Season1\Season2.

Season One as Magnolia

Magnolia (or "Maggie") is the valley girl of the Jungle. She is a close friend of George, best friend of Ursula Scott, and the Witch Doctor's daughter. She could be dimwitted as George. Additionally, there are moments when Ursula could be rough on her best friend. Magnolia sometimes looks at George seductively, which means that she may have a crush on him.

Ursula is the wild feral girl who hunts to survive in the Jungle, and isn't related to the Witch Doctor, She may attack everyone (mostly George), but there are some romantic hints about her and George in some episodes for fans to know. 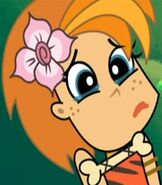