The Parody Wiki
Register
Don't have an account?
Sign In
Advertisement
in: Folks that played on House of Payne, African American Characters, Main Characters,
and 66 more

Malik Payne, C.J. and Janine's college-aged son. He is a young adult whose interest in young women in his class is so extreme that he'll resort to desperate measures, such as trying out for the cheerleading squad, just to associate with them. Initially, he was often bullied in school as a result of his mother's drug problems. As a result, he is reluctant to welcome her back to the household. It is hinted that he is allergic to peanuts and knows how to cut hair. Beginning with the sixth season, Malik has appeared infrequently, due to Doc Shaw's work schedule, as he also starred on The Suite Life on Deck on Disney Channel and Pair of Kings on Disney XD. His absence is incorporated into the storyline, as he goes to the ROTC during Season 6 and off to college during Season 7. While in college, he dates a girl named Summer (Makeda Declet). Malik then marries Summer just that they can have sex. Summer then wants a divorce from Malik to transfer to a college in New England. But since Malik and Summer have only been married for a few weeks, they are qualified for an annulment and that's how their marriage ended. 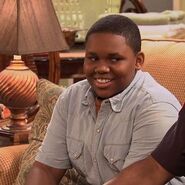