The Parody Wiki
Register
Don't have an account?
Sign In
Advertisement
in: Unsourced quotes, Male Characters, Characters,
and 12 more

Major Glory is Character of Dexter's Lab and The Justice Friends

He is an American Hero for justice, also an Avenger

Major Glory is a tall light-skinned man whose true face is never seen due to it always being concealed by his iconic golden mask. His only visible facial features are his large chin and pearly white teeth. In early episodes, Major Glory's body was drawn with a somewhat realistic and well-built sculpted musculature, although his appearance was slimmed and streamlined shortly afterwards, particularly in his legs, which became greatly reduced compared to his upper body. His attire is very patriotic and has several references to American symbolism, especially the US flag. His helmet is golden and is made in the image of a bald eagle. His suit is mainly white but comes with a red belt and the top has a blue color-scheme with white stars like the US flag, making it truly star-spangled. His cape is long and flowing with red and white stripes like the flag. He also wears blue boots and gloves. In the Powerpuff Girls episode "Members Only", Major Glory's outfit was quite different, with his top being completely blue and only having one star while also wearing red underwear-like tights like most generic superheroes. His belt also had a gold buckle. In "Dexter's Wacky Races", Major Glory's appearance is mostly unchanged from his original look, however the neck portion of Major Glory's helmet is red rather than gold.

Major Glory is a proud and patriotic superhero who is courageous in battle and loves his country above all else, and because of this, he is viewed as an upstanding figure in the superhero community who is quite popular with the Press. However, in his private life, Major Glory is quite a neat freak with a number of fears and obsessive habits. He appears to be a bit of a germaphobe who prefers that things be neat and clean, and he also has a deep fear of bees and dentists, and will degenerate into a paranoid coward willing to go to great lengths to avoid confronting his fears. This obsessive compulsive behavior is likely due to his harsh and strict upbringing under his Uncle Sam. He is also very strict about copyright infringement. Major Glory is very sentimental and occasionally over-dramatic when it comes to his friends and/or emotional moments, almost treating them like family at times rather than roommates/teammates, showing that he greatly cares about his closest friends. He lives with The Infraggable Krunk and Valhallen in the apex floor of the Muscular Arms apartment building and despite their differences and quarrels, they are in fact good friends.

Major Glory is a powerful superhero with numerous superpowers which aid in his battle against evil and he might be one of the strongest heroes in the series alongside Monkey, Valhallen and Krunk. Major Glory possesses the standard abilities of super strength and flight possessed by most members of the Justice Friends, as well as super speed and stamina which he has had since he was a child. Major Glory is also nigh-invulnerable to fatal damage and can even survive in space, however he can still feel pain even if it does no permanent damage to him, which makes his invulnerability somewhat ineffective in that regard as he can even pass out from too much pain. Aside from these physical attributes, Major Glory also has several eye-related superpowers and his toy line also implies that he has many other unseen superpowers. The fact that he was one of the few heroes summoned by Rasslor to represent his planet further proves that he is one of the most powerful heroes on Earth.

Major Glory had already begun his training to become the symbol of America's spirit and the world's protector as a young child under the tutelage of his Uncle Sam.

Pain in the Mouth

After Krunk started suffering from a severe toothache, Valhallen tried telling him to go see a dentist, but was stopped by a paranoid Major Glory who was fearful of the dentist, which lead to a fight between him and Valhallen. Major Glory wanted use both the superheroes and villains to get it loose. However, Valhallen disagreed and insisted in going to the dentist to get it removed properly. He tells Major Glory that dentists have the knowledge and tools to remove the problem. He still rebuffed Valhallen's claims until Krunk decides to make a quick trip to the dentist and was proven wrong. Major Glory paid the price for his mistake when he had to get his own teeth checked by the dentist and it revealed his own neglect in his dental hygiene.

In the Powerpuff Girls universe, Major Glory is shown as the leader of the "Association of World Super Men," or A.W.S.M. (awesome) for short. He and the other members of A.W.S.M. refused to let the girls join in A.W.S.M for the simple fact they're females and it's an all male club. Major Glory's attitude was his downfall when an alien supervillain arrived and overwhelmed the mighty heroes.

At first, the Powerpuff Girls refused to help Major Glory out because of how he treated them before with his behavior and planned to leave him to the supervillain. The girls were eventually convinced to help out by both Professor Utonium and Ms. Keane, whom both inspired them to be better role models for everyone. After defeating the supervillain whom was eventually revealed to be a spoiled brat and a momma's boy, Major Glory and the members of A.W.S.M. meekly asked the girls if they could join the Powerpuffs. Blossom and Bubbles were reluctant and had planned to reject Glory and the others, due to their earlier behavior. However, Buttercup wisely convinces her sisters that they can be better role models and decided to make A.W.S.M. the new "Society of Associated Puffcateers" or "S.O.A.P.", although they make them wear little dresses in the process which the girls find quite amusing. 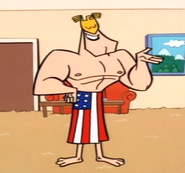 Major Glory with his personal towel on 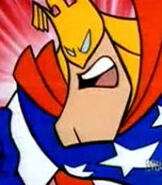 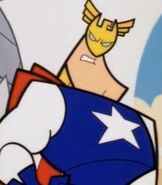 Major Glory in The Powerpuff Girls