Mallory Wilkerson, played by Lisa Foiles, is the fictional female counterpart of Malcolm. She appeared in the episode "If Boys Were Girls", as a girl in Lois' fantasies of what her life would be like if her children were girls instead of boys.

Mallory makes her first and only appearance in If Boys Were Girls during Lois' fantasies. In it she and Renee were fighting over a pen (Like Malcolm and Reese were). However, Daisy was able to encourage Mallory to tell them why the pen meant so much to her. She explains that there was a boy who had a crush on her and chewed the top of the pen before accidentally dropping it on the floor. Renee apologizes for her insensitivity and hates being dumb because her head would be useless without her hair. Mallory tells her that she doesn't need to be a genius because she's sweet and thoughtful. She, Renee and Daisy reconcile and are excited to go shopping with Lois. Mallory suggested that Renee and Daisy goes to the first floor to look for new clothing, while she and Lois takes the 2nd floor. They'll rendezvous at the pretzel place every 45 minutes to check out what they need to get. Lois tells her, Renee and Daisy to calm down because they go to the mall everyday. Soon Mallory and her sisters are hurrying Hal to get in the car because they want to shop.

Mallory has a crush on Jason, a boy who works there and he seemingly is attracted to her, when he was looking for her at Hannigans. Lois tells her that she won't be offended if she wanted to have some ice cream with him. Mallory passes on it because she, Renee and Daisy wants to treat her instead. However near the end, it's revealed that he was really looking for Renee when it's revealed that she's pregnant and Mallory has a problem with her clandestine diet. Soon, she and her sisters gang up on Lois and blames her for their own problems.

As the dream ended, Lois sadly now understood that either boy or girl, any child she bears will be a nightmare. With this, she sees that she is simply not destined for a happy peaceful life, however in spite of this she still wishes that her unborn child at the time be a girl.

Mallory has mid-length brown hair with side bangs and blue eyes. She is a genius but unlike Malcolm, she had no problems having a social life and got along with everyone. Mallory like Renee, Daisy and Lois, loves shopping for new clothes and goes to the mall five times a week.

Mallory, like her male counterpart, Malcolm, is a genius and has an ego. Unlike her counterpart, however, she doesn't share his good nature and is a spoiled self-absorbed brat. While Malcolm shows how much he's embarrassed by his family, Mallory isn't really embarrassed and is much closer to Hal, Lois, Renee and Daisy. There is, however, a dark side to her personality; Mallory is a master manipulator and a rule breaker and unlike Malcolm who loathes being a genius at times, she uses her genius to her advantage for her own gain by manipulating her parents into getting away with things that she is not allowed to as seen when she made Hal buy her a makeup kit that Lois said she could not have.

Being a female, she understands women way better than Malcolm does and as a result she can get into the mind of Lois and overpower her (something Malcolm cannot do) and although she's less likely to get into arguments with her sisters than Malcolm is with his brothers, when she does get into arguments, she goes completely insane and completely forgets all rules and just says whatever offensive things she wants to, not caring about her surroundings, the people around her or any of the consequences of what she does. She's more of a free-spirit than Malcolm and her life is happier, however, in turn, she enjoys making the lives of other people miserable. 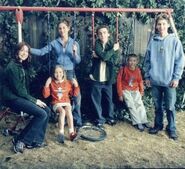 Add a photo to this gallery
Retrieved from "https://parody.fandom.com/wiki/Mallory_Wilkerson?oldid=2317960"
Community content is available under CC-BY-SA unless otherwise noted.