Mamenchisaurus is a sauropod dinosaur genus including several species, known for their remarkably long necks which made up half the total body length. It is known from numerous species which ranged in time from 160 to 145 million years ago, from the Oxfordian to Tithonian ages of the late Jurassic Period of China, and the largest species may have reached 35 m (115 ft) in length and possibly weighed 50 to 75 tons. Mamenchisaurus was first discovered in 1952 on the construction site of the Yitang Highway in Sichuan, China. The partial skeleton fossil was then studied, and named Mamenchisaurus constructus in 1954, by the renowned Chinese paleontologist Professor C. C. Young. The type specimen had an incomplete neck with 14 vertebra preserved and none of these were complete. M. constructus has been estimated around 13 m (43 ft) and 15 m (49 ft) in length. In 1972, a second species was described, named Mamenchisaurus hochuanensis, with a neck that reached up to 9.3 m (31 ft) in length. This species had a complete neck preserved which contained 19 vertebrae. This was the longest neck known until the description of Supersaurus, based on a single neck vertebra, BYU 9024, with an estimated neck length of about 14 meters (46 feet). Another long-necked sauropod exceeding M.hochuanensis was Sauroposeidon which was discovered in 1994. Based on the Sauroposeidon holotype, which only preserved 4 neck vertebra, its neck was estimated to be between 11.25 and 12 meters (36.9–39.4 feet) long. 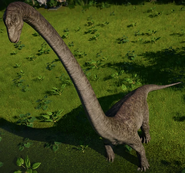