Mammoth Mutt is a female character from Krypto The Superdog.

As Cindy Lou Who in How The Wolf Stole Christmas (2000)

As Heather in Over The Animation Hedge

She is an opossum

As Ducky in The Land Before Time (PrinceBalto Style)

She is a dinosaur

As Ruby in The Naked Cage (PrinceBalto Animal Style)

As Cub Vitani in The Wolf-Dog King II: Balto's Pack

As Angel in Brainy & The Krypto II: Tail's Adventure

She is a puppy

She is a girl who loves computers

As Lilo in Mammoth Mutt & Sonic

She is a girl from Hawaii

As Alice in Mammoth Mutt In Wonderland

As Princess Jasmine in Pookaladdin

As Pinkie Pie in My Little Pet Animal: Friendship is Magic

As Bubbles in The Powerpuff Dogs (Coolzdane Dog Style)

She is a Powerpuff girl 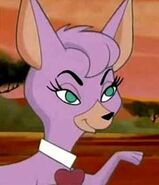 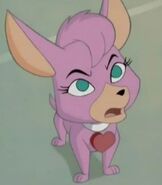 Retrieved from "https://parody.fandom.com/wiki/Mammoth_Mutt?oldid=2093610"
Community content is available under CC-BY-SA unless otherwise noted.